At first it is the red-tipped stakes I see rising about a metre from the white Angolan sand.  A double row of them marks a narrow corridor of death snaking through the bush.  Then I see that between the stakes lie partially uncovered anti-tank mines.  Twenty-eight years ago I was a soldier on the frontline of battle.  Now the frontline is still here and the mines fight on like a lost regiment, not knowing that the war is long over.  It is the mine-clearing NGO, the HALO Trust that forms today’s opposing army as they painstakingly find and destroy the mines, making the land safe for the people of Angola.

Read the full story of this year's visit to Cuito Cuanavale on my travel blog:  Wandering not Lost 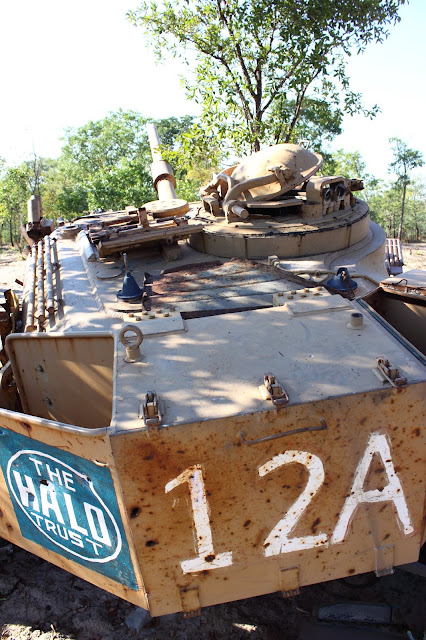 I've always said that an armoured vehicle is the most appropriate transport for the roads in Johannesburg.  Well now I've got a tank, of sorts.  The old Mercedes Benz I've been loaned while I'm up here is a close relative of a Second World War panzer. It's wide, and a bit scraped, maybe as a consequence, and it's slow.  Or perhaps that's the way I drive it.  You hit the accelerator and count to three before anything happens.  Just before the anything happens there's an alarming clunk as the transmission system wakes up and does it's thing.  My friend tells me the panzer has handled a 4x4 mountain pass better than his Land Rover. Impressive, yes?

There is positive side to driving a slow, scraped tank.  When my signal to change lanes is met by the usual Gauteng driver response, which is to hit the accelerator to close the gap, I can slowly ease in my preferred direction anyway.  The sight of the lumbering, slightly bashed panzer is enough to intimidate the driver of the shiny SUV.  I wave a friendly thank you and receive a one fingered salute in return.  Happy Days!

I've been doing some last minute preparation for this expedition.  Buying benzine for my stove because I couldn't bring it on the plane from Cape Town.  A bulb of garlic and some dried mushrooms to add to my food supplies because I forgot to bring them.  Some toiletries, also forgotten.  Added to some other business and seeing some old friends, it's been a bit crazy.

Tonight I'll leave this vibrant, colourful, aggressive and energetic hub of the South African economy.  I'll leave the weaving anarchic taxis and the status symbol cars and lable conscious perfectly coiffed Hyde Park shoppers, and the traffic light beggars and the hawkers.  I'll be on the long, slow road north in a people carrier full of people I don't know towing a trailer loaded with motorbikes.

Sometime in the morning we'll cross the border into Botswana.  From there the long, slow and very straight road across the Kalahari to Maun.

All I have left to do is to return the panzer to it's generous owner.  Then the road beckons.
Posted by Paul at 2:07 AM 5 comments:

So I'm off to Angola again.  Perhaps not as reluctant as when I was a conscript.  But not with the same excitement mingling with anxiety and even fear that I took with me in 2012.  I've been there.  And I've been there again. A journey that put to rest the last of the ghosts from the war.  A new relationship was formed with the place and this time I met people. I had a deep meeting with the Cuban, Roberto. A man who had been an enemy soldier in 1987.  We had no language to explain to each other the depth of our connection. Yet we were able to let each other know in ways way beyond words, the importance of this meeting for us both.  A deeply and touching and affirming meeting between two human beings whose countries put them on a battlefield to kill each other.  We resolved something for each other.  I left in tears.  I left with peace.

So why go back again?  I could say that I'm going back to support another former conscript and Angolan war veteran.  And that is true. But he's capable of doing his trip without me.  He and his buddy from back then and the other friends who are riding along with him on their 'adventure motorcycles'.   I'm going back because I'm always up for an expedition and the possibility of adventure.  And I'm always up for spending time in the bush.  I'm going to give what support I can to these other former conscripts.  I'm going along to enjoy the huge Botswana skies, the endless bushscapes, the beautiful rivers of the Caprivi and Angola. Most of all I'm going to enjoy meeting all sorts of wonderful people.  Travel without meeting new people is, after all, a sterile business.

We start with a long road trip from Gauteng to Maun in Botswana.  I'm travelling with my old MK friend Patrick again.  So the journey will be a meandering affair, at times 'pushing' hard with hours on the road, and other times lingering with friends and connections old and new.  We hook up with the bikers and then head to Rundu in Namibia.  Then to the border crossing at Katwitwi and on to Menongue and Cuito Cuanavale.

As with all travel, each journey is different.  Even when it is to the same place.  I look forward to sharing my journey with you once again.

No Place for Triumphalism 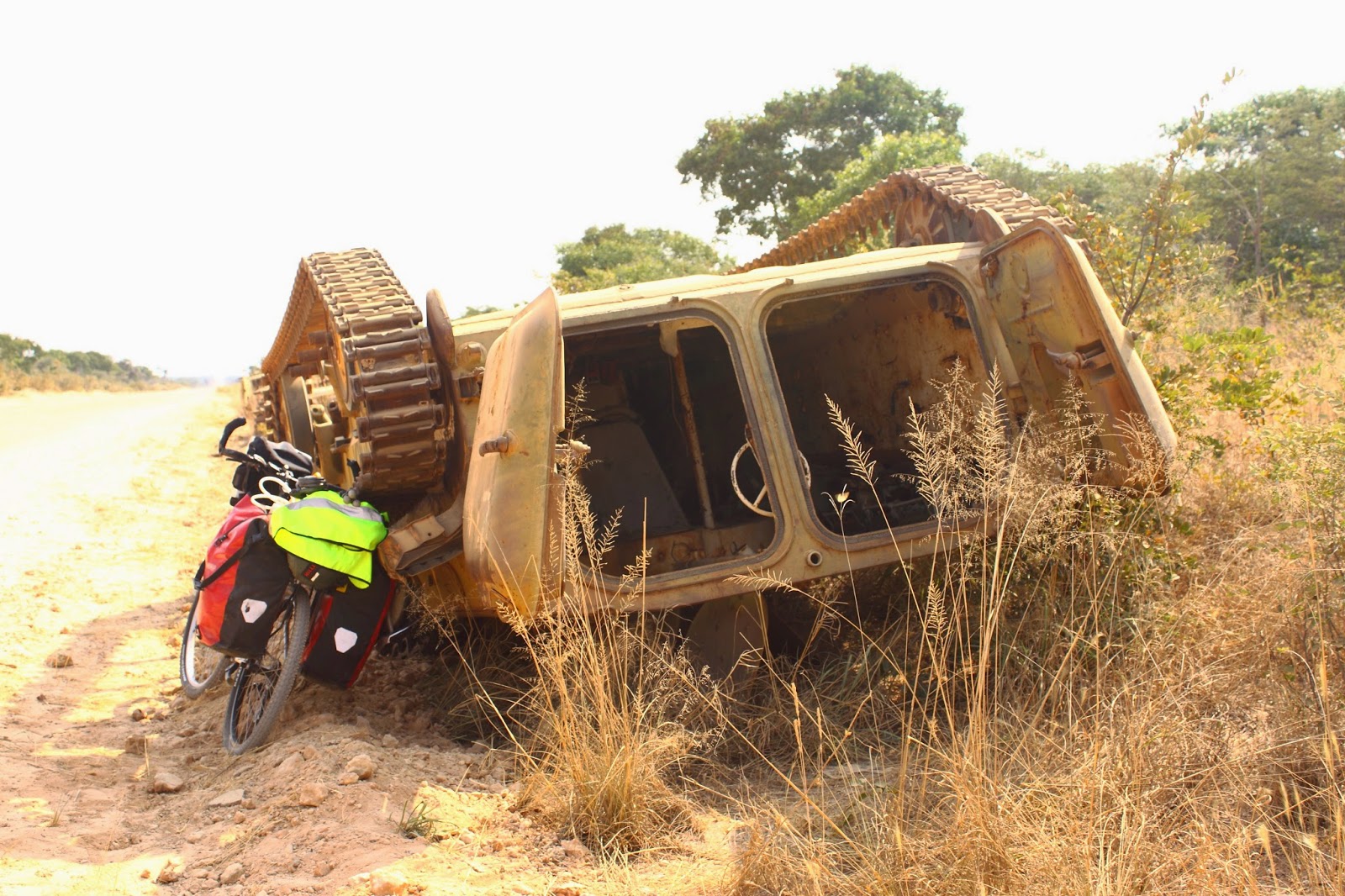 As I took this photograph, I wondered who died here.  On the road from Cuito Cuanavale to Menongue there were many such wrecks.  Someone, somewhere, is likely to know the story behind each one.  A story likely to include fear and death and grief.

I tried to be respectful of these places. Particularly as I was part of an invading army all those years ago.  Someone's son or brother or husband died here.

I was reminded of the need to tread lightly when I was showing some slides to an audience which included former liberation movement soldiers.  Afterwards one man told me that he had lost a close family member during an ambush on this road.  He was in an APC like the one in this picture.  This could have been the very vehicle in which he died.  The man said the photograph had upset him, raising feelings of grief and perhaps the trauma of his own war experiences.

For those of us who have returned to the war-places of our youth, it is good to remember that this is no place for triumphant poses next to the burned out wrecks of 'enemy' vehicles.  Instead, these should be places for deep, human reflection.

War and Moral Injury: Beyond the Concept of PTSD

When I first read Jonathan Shay's idea of Moral Injury, a lightbulb went on.  This is what had been missing for me.  The clinical 'disorder' :  PTSD, didn't really fit for me.  But 'moral injury' described this feeling of being troubled by the past.
Posted by Paul at 7:32 AM 1 comment:

Finding Peace on the Road of Death 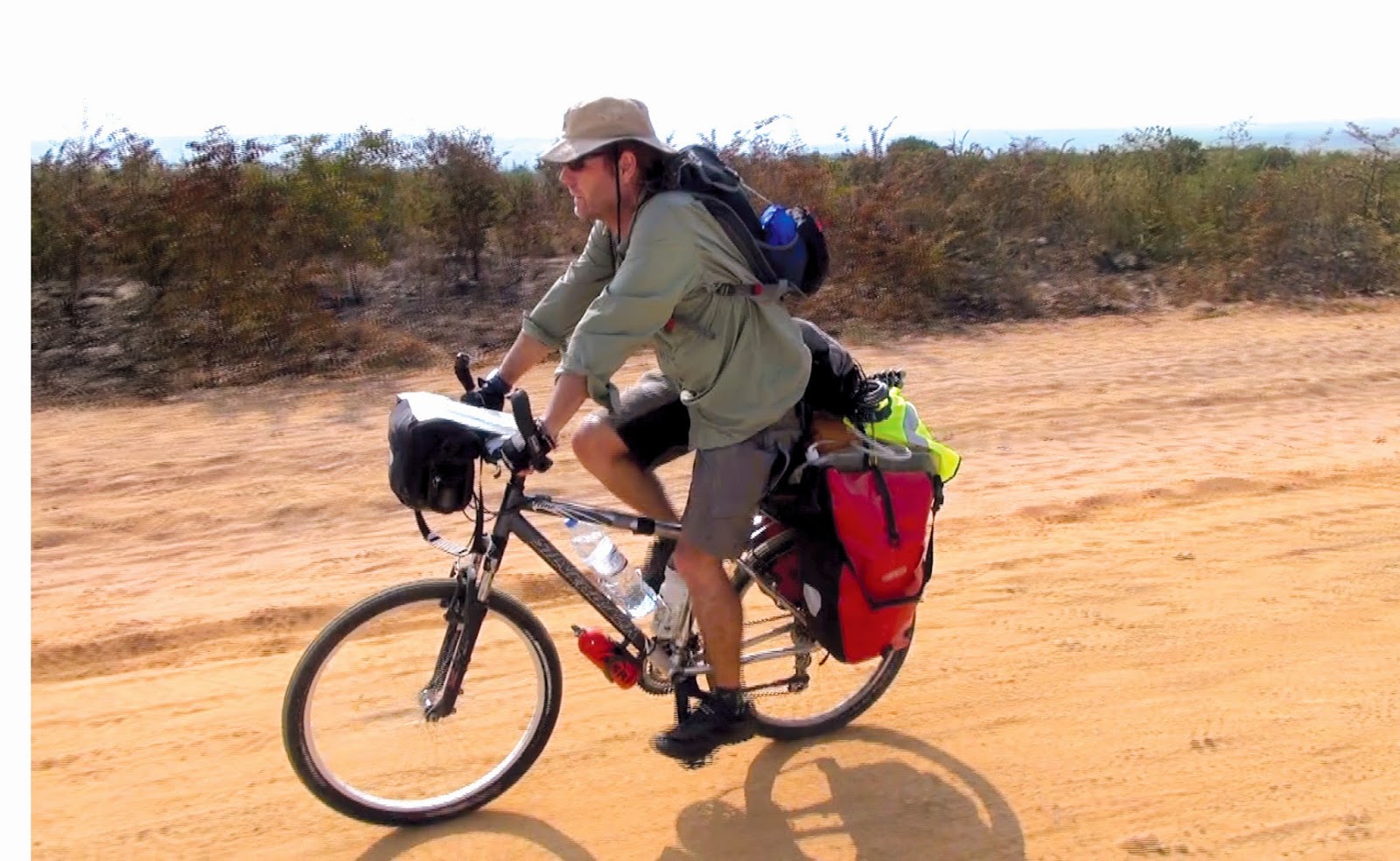 In full flight.  On the road out of Cuito Cuanavale.  Starting the 190km journey to Menongue on what some called 'The Road of Death'.
Posted by Paul at 1:17 AM 3 comments:

An interview and some footage from Angola

A previous link to this video was removed.  Hopefully this one will stay intact!
Posted by Paul at 8:01 AM 3 comments: 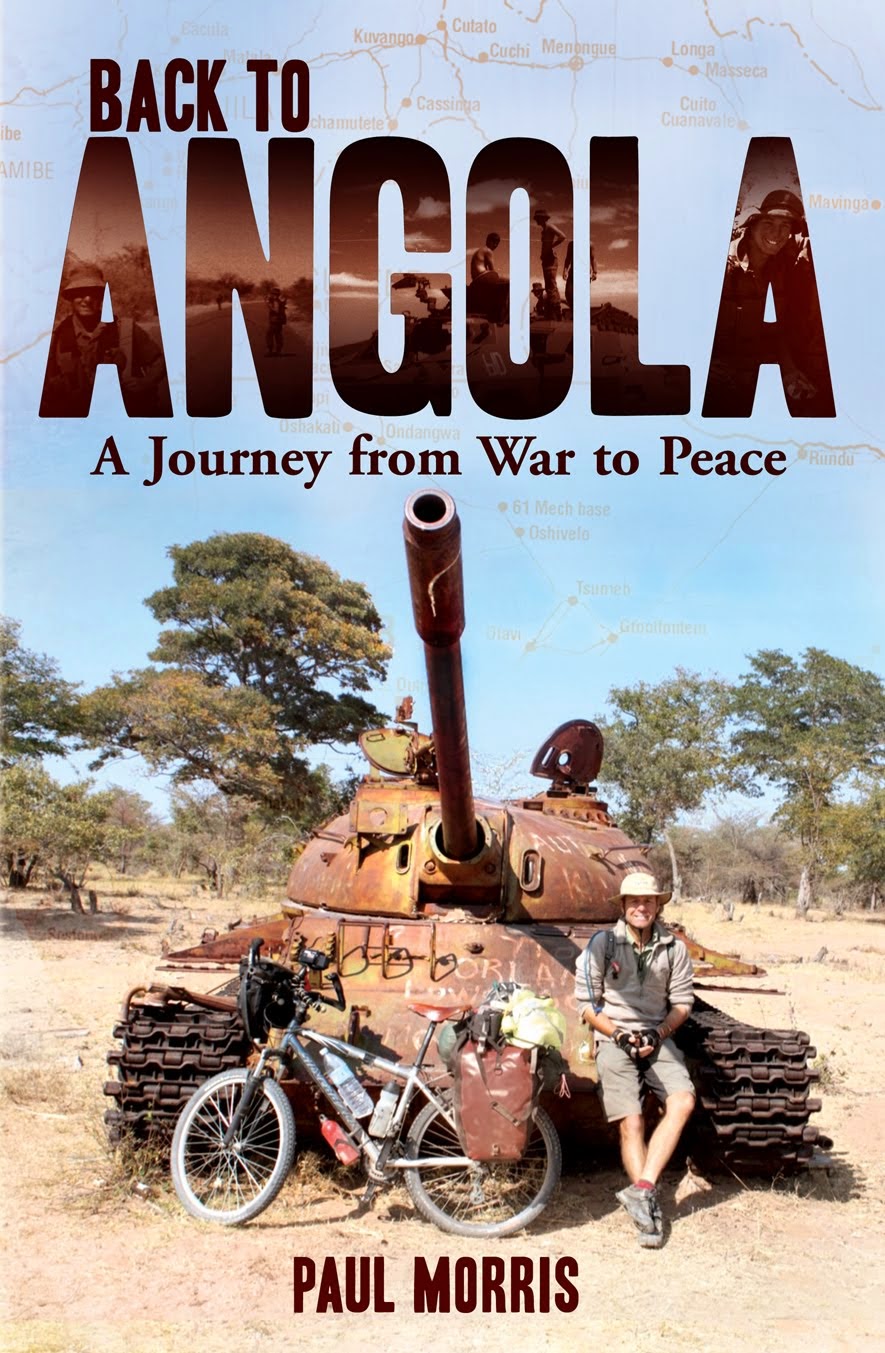 Click on the image to buy the ebook from Amazon